I’m a snob. I admit it. I really am a makeup snob. I like my high end makeup, I like how it performs (usually!), I love the luxurious feel, I love everything about it. But that isn’t fair. I should really branch out into drugstore makeup more often! Not only is it a lot nicer on my wallet, but just because it has a high price tag, doesn’t mean it’s better! So, today I’m going to talk about a drugstore eyeshadow palette!

Give eyes and cheeks the ultimate definition with this all-in-one shadow and highlighter makeup palette.

Draw attention to your eyes with bold and indulgent definition. Maybelline’s makeup palette features eight eyeshadows and two highlighters to create your all in one makeup look. Discover more of Total Temptation Maybelline’s most addictive makeup collection! – Mayebelline UK website

I got this for the colour variation, it has not only warm colours, but also cool toned, which is something you don’t find a lot in any brand, because everything is about them warm colours lately! I’m not big on cool toned colours, so I don’t tend to buy them, but I did want more of them in my collection, so this palette was perfect!

Unfortunately, this wasn’t that impressive. 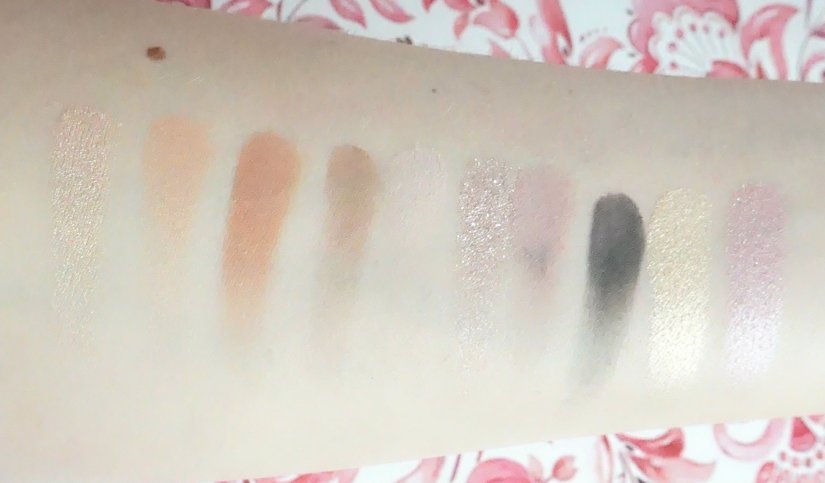 I know, swatches don’t say everything. The glittery shades are beautiful, they are nicely pigmented, not too much but enough to be buildable. I was genuinely impressed by them! They aren’t powdery, pick up easily on a brush and on your finger. They apply really smoothly, wear nicely and are just really great! The highlighters don’t suit my skin AT ALL and are way too pigmented to be a highlighter, so I just use these as shadows, but they just seem like a big waste, because they take up a lot of space for just an eyeshadow… however it’s the mattes I have issues with.

Now, the crease colour peach brown is just not pigmented at all when applied with a brush. It just doesn’t show up at all, not only that, all the mattes are incredibly powdery, inconsistent in pigmentation,  and don’t pick up a lot on your brush, more ends up on the palette making it a mess. I mean, I know I shouldn’t expect Anastasia Beverly Hills quality and pigmentation, I know, but I do expect products to be at least consistent and just nice when I buy them. I like my colours, I like a lot of pigment in my crease, so when the colours aren’t pigmented and don’t translate the same on my eyes as they do in the palette, it makes me disappointed!
Honestly, if they don’t show up on my mayonaise coloured skin, I don’t even know what it would look like on anyone with even a slightly darker skin tone than me! The drugstore isn’t made for dark skin, but come one guys, if it doesn’t even show up on a white skin colour, it will never show up on dark skin! Get it together guys!!!

A good thing about these shadows is that they do not crease at all, which a lot of my more expensive shadows DO, so that’s a big plus from me!!

I think this palette is OKAY if you are a beginner and want to try out makeup and don’t want to get two palettes. This has it all, just don’t expect miracles, and I’m highly doubting this would show up on you if you have a deeper skin tone (but if it does, please correct me!!! I hope I’m wrong). But, if you are like me, and want pigment, this isn’t worth it!

Does this mean I’m still going to be a snob about makeup? No, I am impressed by the shimmers in this palette, so I am looking forward to finding something new in my local drugstore! 🙂

May is Ehlers Danlos Awareness month! I got diagnosed, finally, in November of last year. There's no cure, I walk with a cane now, my eye sight is getting worse, I dislocate joints daily, sleeping is one of the rarest pokemon I can catch, brain fog makes me forget how to even take care of myself, depression and anxiety don't make things easier, and it also gave me ADHD and IBS, but at least I have some wonderful cat carers 🌞
I found some old photos at my grandpa's, and decided to try out the new things myheritage has and well... I'm definitely a Van Leeuwen 😅
"Why can't I hold you like a normal person? I'm holding onto you like I'm an NFL player."
If you know me, you'll know I got PTSD from previous relationships. So, to be treated like an actual princess is absolutely terrifying, because I'm not used to it at all!! I guess it just means I'm more appreciative of it now💕
Loading Comments...
%d bloggers like this: