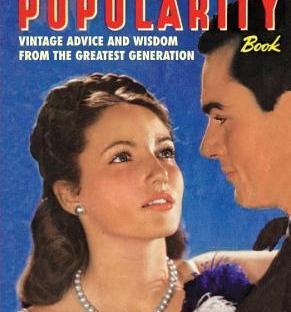 I make the joke a lot that I have no friends. I do have them, don’t worry, but I’m just a really horrible friend myself. And the best part about my friends is that they know and don’t take too much offense to that. Bless their hearts! When I told my mum I ordered this book, I said: “Look! I’m finally going to have friends now!” but did this book give me any solid advice?

First published in 1944, The Popularity Book is a vintage guidebook full of wise and wonderful advice on living well, building poise and maintaining fulfilling relationships. Drawn from books, testimonials and magazines from the World War II era, this book shows the forthright common sense and romanticism of the “Greatest Generation”, a generation inspired by debonair role models such as  Clark Gable, Cary Grant and Katharine Hepburn. As relevant today as it was in the 1940s, The Popularity Book offers counsel on being an unforgettably great date, devising a game-plan for making a man propose marriage, and pointers how to be charming. Compiled and originally published by Arthur Murray, who famously said he could teach anyone who could walk how to dance, it also features his iconic step-by-step footprint instructions on how to Samba, Fox Trot and Rumba divinely!

Honestly, it’s the perfect book for me. My vintage aesthetic is a lot of the 40s and 50s and this book should be right up my alley, but it isn’t. The book is set up in a series of essays on all kinds of subjects. Some of them are written by Arthur Murray, others written by other people. Some essays are interesting, and there a few little quizzes throughout the book which are cute. It’s just that it’s more about dancing than anything else.

I understand that Arthur Murray is a dance teacher so it makes sense that this book has somethings about dancing in it, but I’m pretty sure that it’s about dancing for 70% of the book.

Now, if the summary of this book told me it would  be just about dancing, I wouldn’t have bought it, but it doesn’t. Yes, it mentions dancing in it, but not that it’s so heavily pressed in it. I believe that Betty Cornell’s Teen-age Popularity Guide is a lot better as a popularity book than this book will ever be. I mean, if you want a book about how to do certain dances such as the Fox Trot and the Waltz, than yeah sure read this book! But if you are looking for a book that gives you advice in social settings in the 1940s, this isn’t it. Which is a real shame!!

If you are a dance lover who wants to read this book, you can get it here!

I've been looking for more old Hollywood movies to watch, so tell me your favs so I can add them to my list!! 🥰
This week has been one HELL of a week, but I've never felt more loved. I highly recommend the poly life 💕🌈
I'm so excited to have the sun back again!!!!! I can finally wear all my cute clothes again🥰
It's finally time for me to bust out the pastels 🌞
Loading Comments...
Comment
×
%d bloggers like this: